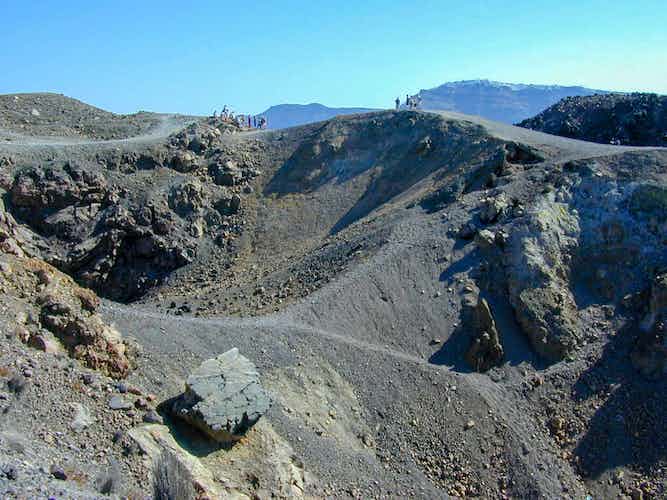 Learn more about one of the largest underwater active volcanoes in the world.

Fifty five years had passed before the next eruption occurred in 1925. A series of minor seismic events on July 28th warned the inhabitants of Santorini that the volcano was waking. A group of geologists sent by the Greek government, as well as German and Dutch volcanologists went to observe.

The eruption, which began on August 11th, was heralded by tremendous fountains of steam and water in the area of Kokkina Nera (where the Hot Springs are).

Volcanic activity included marked increase in temperature in the bay of the Kokkina Nera, the sinking of Nea Kameni's east coast and the formation of the Daphne dome (named after the first war ship to arrive on the scene immediately after the eruption).

Explosions sent a phreatomagmatic eruption column (volcanic ash) 3,3 kilometers into the sky. Lava fragments rained over an area with a radius of more than 850 meters. An estimated 100 million square cubic meters of lava flowed in two broad branches, one to each side of Mikra Kameni, filling the channel separating it from Nea Kameni and adding substantially to the land surface of the island which had now become a single mass.

A few days later the center of volcanic activity moved 200 meters to the southwest to a site which today has several craters grouped together. These craters and the pyroclastic cones of lava fragments which made them were created by the volcanic activity of 1925.

The first wave of activity ceased in January 1926 for four months, only to start up again for a brief period. From May 1926 until January 1928 there was a pause, which was followed by four explosions followed by another explosion that created the Nautilus Dome. This dome is no longer visible for it was covered by lava produced during the next stage of activity.

A series of explosive phases and upheaval of land mass characterize this period. After a period of quiescence of only 11 years, the volcano awoke once again. Early in May 1939, it was observed that the waters in the little bay of Agios Georgios with its chapel, were heating up, and the coastline was subsiding. A submarine explosion at the harbour entrance on August 20th cleared the vent for the new magma which began to appear, creating a small dome which the volcanologists of the time baptized 'Triton'

One month later, the focus of volcanic activity shifted a few hundred meters to the northeast where it created lava flows and a dome which were given the name of 'Ktenas' after Greek geologist who studied the Kameni eruptions.

This lava filled the little harbour of Agios Georgios and covered the Triton dome. Between November 1939 and July 1940, the volcanic activity shifted even farther to the northeast, creating the Fouque lava flows and dome, named after the French naturalist who studied Santorini and the eruptions of Kameni up until 1866.

In July 1940 two new centers of activity appeared to the south of the Fouque center. The first was called Smith, after an American and the second Reck, after a German volcanologist, both of whom had studied the 1925 eruptions. These centers produced lava domes and flows which covered the western slopes of the now single island of Nea Kameni and flowed into the sea. The explosive activity of this period was not severe, and the height to which volcanic ash was ejected did not exceed 1,200 meters.

Late in August 1940, two major explosions from the summit of the island blew the old rock plug from 1866 into the air, opening two large craters each 50 meters across. These are the craters which visitors to the island go to see today. There was no magma outflow from these craters. Towards the end of November of that same year, viscous lava began to flow from a vent a bare 100 meters to the east, creating the lava fields named 'Niki' (Victory), in honour of the Greek victories in Albania. The lava covered the eastern slopes of the island, stopping just short of the sea.

This eruptive cycle came to an end in July 1941.

The most recent volcanic eruption in Greece was that which shook Santorini early in January, 1950. There had been advance warning in the form of seismic events since the previous August. On January 10, 1950, an explosion blew the acid rock plug to the southern foot of the Niki dome, opening a vent for the new magma which began to pour out. This was punctuated by intense explosive activity which spewed tephra 1000 meters into the air, and dropped lava fragments within a range of 850 meters all around.

The phreatic explosions and lava flow continued until February 2nd, creating the youngest volcanic rocks in Greece and was named the 'Liatsikas Dome' after the Greek geologist. The Reck dome disappeared, leaving a huge funnel-shaped depression.

We care about your safety.

The health protocol of ARMONIA Hotel follows the national regulations and safety protocols as published by the Ministry of Tourism, the Ministry of Health and National Public Health Organization (EODY).
Our goal is to make your stay at our hotel as safe and carefree as possible.